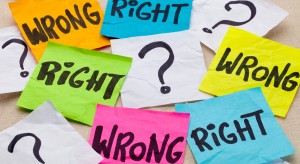 „Banking giant Credit Suisse has just plead guilty to criminal wrongdoing. It plead guilty to enabling thousands of Americans who did business with the bank to hide their wealth. OK, now what? The bank will in fact be penalized: it will have to pay a penalty of $2.6 billion. Moreover its reputation will at least briefly be tarnished. But it is unlikely otherwise much to suffer, certainly over the long term. More to the point, the bank, the organization, is an abstraction. What does it even mean to say that a bank, an organization, has been punished, penalized?
Meantime the man who has lead Credit Suisse since 2007, Brady Dougan, goes unpunished. He is not penalized. To be sure, it’s likely he’s suffered some. It’s likely he has felt some shame, some embarrassment, some humiliation. But that’s it. Not only is he not legally penalized, he is not organizationally penalized. He remains in the wake of this outrage, this conviction of wrongdoing, the chief executive officer of Credit Suisse.
Let me be clear about this: unless and until people are clearly and publicly punished – legally and otherwise – we can count on the wrongdoing to continue. For whatever the nature of the legal infraction you can be sure about one thing: it was committed not by institutions but by individuals.”